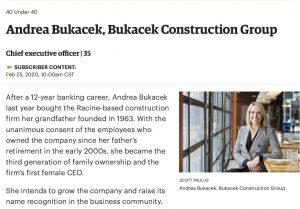 Bukacek Construction would like to share some information on a project that is near and dear to us. We have had a very long-standing relationship with The Prairie School. Our leader, Andrea Bukacek graduated from this highly esteemed Wind Point educational institution and her daughter is poised to do the same (well, in just a couple years since she is still in early childhood). Speaking of early childhood, that is exactly what this project is about. The project, which is aptly called the “Early Childhood Addition”, consists of four (4) new classrooms which tie into the existing school and maintain the integrity of this school’s unique architecture. Zimmerman Architectural Studios, Inc. has designed a building which is aesthetically pleasing as well as functional for the school. Please see below for a couple renderings of the final product and, additionally, some current progress photos taken with Bukacek’s drone! You can see in the drone photos that the footing/foundation walls follow a curved line which matches the existing building curves. We have completed a small renovation in the existing building which ties the new addition to the existing school. You can expect to see this completed project ready for the 2021 new school year. 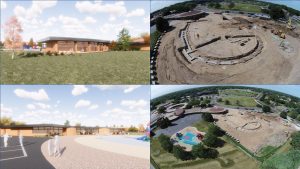 Bukacek Construction would like to extend a warm welcome to its newest project manager. Paul Miller comes to us with over 32 years of construction management experience. He has managed the construction of some of the largest projects in southeast Wisconsin and we are extremely happy that he has decided to join our team. If you talk to Paul, congratulate him on his new endeavor!! A new head shot is in the works but for now, this will have to do! 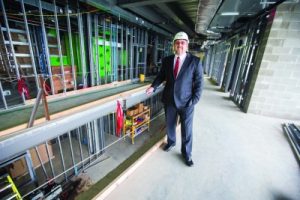 Did you know that Bukacek Construction has been a leader in the construction industry since 1963? James Bukacek, the founder of the company, passed the baton to his son Nick who led the charge until 2005. In preparation for retirement, Nick sold the company to his employees under an ESOP (employee stock ownership plan). It was employee owned and led by Jim Cairns as CEO until recently. That change started an exciting new chapter for Bukacek Construction when third generation and first female owner Andrea Bukacek (Nick’s daughter) purchased the company in August 2019 and expressed her excitement to carry on her family’s legacy. Bukacek’s former CEO, Jim Cairns, is now President of the company. To read additional articles on the new ownership, please click on any of the links below.

Bukacek Construction is elated to work alongside Plunkett Raysich Architects, LLP to build Educators Credit Union’s newest facility in Mukwonago, WI. This is an exciting building for ECU because it is a new and updated design indicative of the exciting changes in the banking industry. This branch will contain Interactive Teller Machines (ITMs) which look similar to ATM machines, but differ in that they allow customers to have a face-to-face interaction with a teller via an interactive screen. This allows for extended banking hours. The building site is in a prime location in Mukwonago and ECU looks forward to being the very first credit union to serve the Mukwonago community.